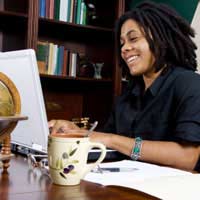 Active voice is advantageous in written communications because it is a direct, concise and engaging manner of writing. Readers know who is acting at all times and don't need to wade through extra words to understand what is happening in any given sentence.

In business letters active voice becomes an important method of re-iterating all that an individual or company is doing for a customer or client. Active voice allows individuals or companies to claim the spotlight. For example, the sentences:

Let readers know exactly who should be praised for something (Sandra and Fabulous Frozen Foods), which is a good strategy for keeping an individual or organisation at the forefront of customers' and clients' minds.

Active voice also tends to use fewer words than passive voice making it a good choice for letters with a strict word count or page limit.

For example
A company would probably much prefer to write

"We, Fabulous Frozen Foods, will freeze your account if payment is not received by 1 May".

The subtle distinction may help customers or client see the action as inevitable rather than as a choice made by a particular company. Similarly:

"The decision was taken to make 300 workers redundant"

is usually seen as preferable to:

Finally, when it is legitimately not known who has done something then the passive voice can communicate this without making it obvious or raising any further questions. Stating "the disappearance of six laptop computers is being investigated" communicates that the laptops went missing and the situation is being investigated without having to disclose that no more is known.

Understanding active and passive voice is important for recognising which is the best choice for any given business letter. The advantages of active voice make it a stronger method of communication in many instances, but there are also situations in which passive voice is a better option.